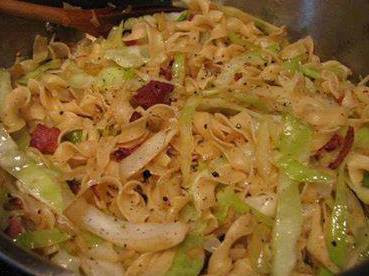 In a large skillet over medium-high heat, cook the bacon until crisp. Remove from the pan and drain on paper towels, then break into bite-sized pieces. (Warning: there’s a chance that you could end up snacking on the bacon bits while you’re finishing dinner. It’s been known to happen here.)

Drain some of the bacon fat from the pan, reserving enough to cook the onions. Add the chopped onion to the pan and cook for about 1-2 minutes, or until the onions begin to soften. Add the cabbage to the skillet and cook until tender, stirring occasionally. When the cabbage is tender, add the egg noodles and bacon, mixing thoroughly. Season with pepper. Serve immediately.